Essay on The Life of a Beggar

Indian Beggar Article , Essay , Situation : He is seen on roads we drive. He is seen on the pathways we walk. He is seen on stations. He is seen seeking shelter under a broken roof. He belongs to the Indian history. He is either looked with pity or with disgrace. He has taken the bottom most position when it comes to class. He is usually not welcomed by many. He is asked to go away before even coming inside. His shaggy beard, torn clothes, dirty bag and a bowl for the coins brings a frown to many people’s face.

The Indian beggar plays a significant role in the Indian society. He goes to a varied kind of people of which a minority spare him a few coins. Those coins don’t even reach to buy a bottle of water for a day. At the end of the day, his profession tires him out. He tallies his coins to buy the bread for his toil. His family awaits his arrival. Even though it is just bread and water, they share and enjoy the food for the day. The day repeats again when the sun rises. This is a common and saddening situations in our daily lives. We never looked further and behind those tattered dress they wear. However, India is a land of variety. So is the scenario with beggars too. Take another situation. A recent report talks about a man. A man named Pappu Kumar. He is a beggar by profession. He can be seen begging on the railway stations of Pune. Not until recently the police took him to custody. When enquired, it was known that Pappu Kumar has a land worth Rs. 1.25 Crore. He earned a massive amount by begging for alms for many years.

People as such are also encouraged amongst the begging community. Because of the helping mentality of a large amount of people in India, such criminals get a boost and consider it as a business. This hence deprives the people in the society who actually need help. The Indian beggar is always not a HE. Majority of the people roaming the streets are women and children. Their condition is even more tragic. For a day’s milk for her baby, she roams the city asking from shop after shop. She approaches the people who ignore her. Even the children aged from 6 to 14 years are seen in gangs. When they lose their hope in people, they indulge in thieving and robbery. Petty thefts get them held under police custody and they are send to juvenile homes. Just an act from your side, can change all these. 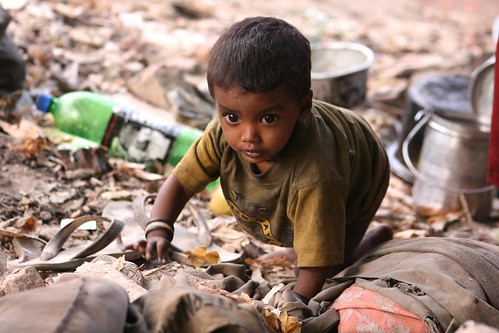 So next time you get down to the streets and you see a beggar, maybe a Rupee coin will change his life.